I have a book called “The Crusade of Prayer.’ These are prayers given to a prophetess going by the name of Maria Divine Mercy. The prayers were given to her by Jesus Himself for us to pray for the preparation of the second coming. The prayers are very powerful and I love saying them, because I know they make a big difference in God’s Will being accomplish by saving so many souls. 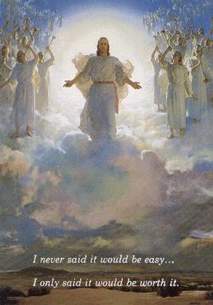 It can get confusing sometimes when you hear so many different prophecies out there and they seem to contradict one another. What can be so confusing is that they are from very genuine people recalling visions given them by God. I remember I had a friend who was a seer of God’s once and she hated dates, because Gods’ timing is not ours. We don’t always interrupt what we are told by God correctly and that is where the confusion can come from. I do believe God sometimes can set us up as well.  I have experience it and I am sure many of you have too and we are so glad that He does. If He didn’t set us up sometimes, we would do certain things differently, but because we were trick into it, we received great blessings that otherwise we would not be privilege to have. God is good. He did command us to go out into the world as a lamb and be sneaky as serpents. If He is telling us to do that, guess who is being sneaky with us sometimes. He has too for our salvation.

If having visions about the era of the rapture is going to get us moving, He will give us rapture dreams, but leave out it is not going to be in your lifetime. If it is the second coming that moves you then He will use that to move you. He doesn’t lie, He just doesn’t let you know everything, because it would be harmful. In one of my visions I had from God, I saw people in front of a table at a wedding feast and then suddenly everybody turned around and was dancing. I knew it was the wedding supper of His brides, but what was very interesting I complained to Him, because the picture was so small on the left hand side of the corner down at the bottom of the screen. I said to Him ‘can’t you make the picture bigger’ and then light dawned on me and I realised that was the message. More than three quarters was empty. He was telling me I knew next to nothing about the future, despite of all prophesies out there, there was a lot not being told for our sakes.

He said to one visionary that these rapture dreams were like fire drills we sometimes practise ourselves. We practise these drills to make sure if a real fire came we all would know what to do and it keeps us all on our toes. Well God apparently does these things also with us.  And without these fire drills we would all be asleep spiritually and then the end of the world would happen quicker than God planed it. We were also told because of people praying in earnest last year, the rapture would of taken place last June. Prayers and sacrifice are so important it can stop prophesies from being fulfilled. For example I really believe God was going to end the world in the 12 century. As I said once before in another article, St. Francis died with a secret and a friar wanted to know what that secret was, so he prayed and prayed until St. Francis appeared to him one day and told him that God would of ended the world then, but because St. Francis was chosen by Jesus to rebuild his church and because he obeyed God spared the world at that time in history. God does know how to motivate us into action.

We are Still Very Much in a Spiritual War

We are still very much in a spiritual war and we have to be involved in order to win. We would be disobedient if we didn’t engage and fight back and declaring over and over again that everything Satan has stolen from us returns back at the very least seven fold. I was upping it to 7,000 fold return and God was really keen for me to do this. Most of us say seven times back return, but in my opinion it is because our faith is not strong enough to believe that God is that generous He would gladly return more. Matter of fact one day I said I won’t declare seven billion back, because if I got that return I wouldn’t be mature enough to know how to handle it. And then I felt straight away God’s presence and He was sad that I thought that way. In other words He just wanted me to have the faith to ask seven billion back and that would have made God very happy. So there is no limit to God’s generosity and we always put limits on Him, because we do not know Him that well so we don’t believe.

The important thing is despite of all the different prophecies out there we need to know one thing, and that is be ready because Jesus will come like a thief in the night regardless. It really doesn’t matter if the rapture be tomorrow or 4,000 years from now. We have to be ready now, because we don’t know when Jesus will come for us. We all could die tomorrow. So we just do as He says and love Him as if we are already in Heaven and that will please Him very much and the rewards how can we describe them.

1 Corinthians 15:58. Therefore, my beloved brothers, be steadfast, immovable, always abounding in the work of the Lord, knowing that in the Lord your labor is not in vain.