There is a huge difference between honouring somebody and worshiping somebody. I honour my parents, and especially my father. Not because I love him more than my mother. Some people might be confused by what I have just said. The last few months of his life I saw the making of a saint before my eyes. I know people are thinking I am just boasting here, but that is not it. I love God with my all, so anybody who brings me closer to God in any way, I am going to appreciate them. To see a making of a saint before your eyes, helps you to understand first what a saint is, secondly how straight and narrow the road that leads to life eternal is and that God can do all things even to people who you think is least likely and so much more. I saw things during his trial that was incredibly beautiful and amazing about God. I also saw the opposite, the horrific attacks Satan placed on him. It is no small war becoming a saint. You have to give your all to become one. And God is right there for you and most willing to make you one. God told my mother and myself at the same time that what my father was going through in a few months, was what a saint normally takes a whole life time to reach. So yes I can’t help be amazed at what God did for him.

When I was a young Protestant back nearly forty years ago, Protestant thought less of Mary than they do today. I rejoice when I hear Protestants spending time meditating on the role Mary played in our redemption, even though they probably wouldn’t say it like that. I remember my Minster back in the old days, even though a good man, with a sneer of disapproval on his face, he told me that he read that Mary and St. Joseph were bad parents. Even then my heart was saying how could they have been bad parents? Where does he get that idea from? He certainly didn’t get it from the Holy Bible. 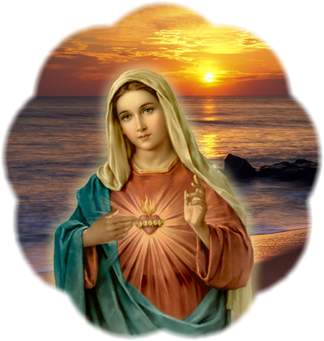 I don’t know how many times my heart feels like it is breaking when I hear how Protestants misinterpret Catholic’s relationship with Mary as worshiping. I am not saying there aren’t some Catholics that have over step the line, but certainly not all Catholics have. And I know if we dare call ourselves Christians, we have to first obey God foremost, otherwise it is a lie. God doesn’t want us to consider ourselves superior to others. He wants us to love one another as He loves us. Therefore God does not look kindly on people who act as if they have the authority to judge another; that role belongs entirely to Him. Especially when we judge somebody in His name.  Judging others will backfire.  Instead of judging somebody when you see has a fault, you should pray for them out of your love for that person and God. That way God will not judge you.

How many times I have seen in my own life (and no doubt you have seen it in your own too) when people have judge me wrongly. They judge by outward appearance. They judge by what it looks like to them. How many times a very little innocent thing has been taken out of contexts and made to look like something that in truth was not at all happening. We have all been guilty of it. Pride in our own reasoning is not healthy, but instead dangerous to the road of sainthood. The straight and narrow road that only a few will find, mostly, because we don’t want to discipline ourselves. We want to go on the broad and easy road that many travel on, because on this road we need not care about how we hurt others, we simply do what we like and then we have a nerve to call it good.

God looks into the heart of the matter. Protestant do not know what God Himself teachers the Catholics, because very few Protestants will read and study what Catholics saints have been told by God. I was told by one lady that she did her homework. She knew what Catholics believed in, because her mother was a Catholic and her grandmother was a practising Catholic. So was my mother a practising Catholic and my grandmother too was a practising Catholic. I still didn’t have a clear understanding of Mary. I remember one day I really wanted to know what the rosary was all about. So I asked my mother and she was trying to explain it to me. I couldn’t understand what she was talking about, so very unlike me, because I do respect and honour my mother too, in my frustration I threw the rosary beads at her and I said ‘say it!!’ So my mother starting saying the rosary and then I got it. I then understood what she was talking about.

More you look into Marys sacrifice the more you love her. ‘Love one another as I have loved you’ is a commandment of Jesus. People you owe your life to, always holds a special place of honour in your heart. If you do not have that special place of honour towards them, there is something wrong with you. You simply would not be a very humble or grateful kind of person would you? One day I was worried about one of my cats, he wasn’t getting enough attention. He isn’t as demanding as all my other animals are. So I had to go out of my way to give him the attention he needed and immediately he is now demanding attention like all the others. Now I received a lesson from it, and it was the more time you spend with a person or animal, the more you get to know their personalities and therefore the more you love and appreciate them. Now that might sound a very odd thing to compare this lesson with what I learnt about Mary, the Mother of Jesus here. The truth of the matter is, if you don’t spend time meditating the honour Mary received as the Mother of Jesus in the first place, you are going to miss out on many blessings.

Jesus Wants Mary to be Honoured by All of Us

Jesus wants His Mother to be honoured and thanked for the important role she played in our redemption. If she had said ‘no’ we would be in a lot of trouble. She was especially created to be the Mother of Jesus. Nobody would have been able to take her place. No one would have been strong enough to take her place. She was more valuable than a prophet. God will tell a prophet if you don’t do it, I will get somebody else to do it. This is not the case with Mary. You don’t know things about Mary as the Catholics saints do. Jesus and Mary both tell the Catholic saints things that the Protestants saints are not willing to hear, so they are not told. Jesus and Mary will not speak to them about it. Generally speaking you have to be both humble and open enough, before God will talk to you on any subject. I have had only one experience out of all my experiences where Jesus branched out onto something I wasn’t prepared or opened for.

And that was when I was about eight years old. I saw Jesus in spirit, sitting on my bed and on His lap was a very small white lamb. And He was stroking it and told me it was me. I couldn’t understand it and I looked up and said to God the Father, ‘that is blaspheme only Jesus is the Lamb of God.’ Then a thought came to my mind and it said ‘who is this talking to you.’ Then I thought only people commit blaspheme not Jesus and so then I looked at Jesus again. I saw Him bent over with a stick in His hand drawing something on the ground. (I didn’t know that is exactly what Jesus did with the women that was caught as adulterous in the Gospel.) I saw Jesus had a beautiful smirk on His face. He thought it was funny. I then turn my attention towards the lamb and was trying to work it out. Then the visitation ended.  I was left still wondering what it all meant. Why I have brought this up is to say out of all my experiences this is the only time God left me confused. In that it was too advance for me at that time to work it out.

I am sorry if I have to keep relying on my supernatural experiences to explain things, but I know I am called to write and to teach what I know. Since I am not a scholar I have only my experiences to go by. I let God worry about the outcome of everything I do or write.