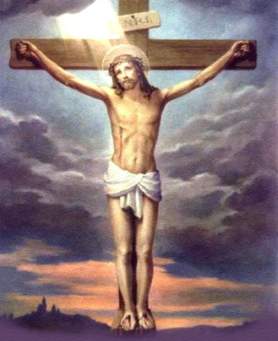 The Prayer: I offer to You, O Lord, all the bitterness of Your Passion, in reparation for the offenses committed against You.

Our Lord’s Promise for people who say this offering. “I make over to you all the bitterness of My Passion, that you may offer it to Me again, as though it were your own possession. And whoever shall do this shall receive double at My hand, and whenever he renews this offering he shall assuredly receive the double; and this is that hundredfold which receives in this life, and in the world to come, life everlasting.”

Protestant are less likely to be taught the importance of meditating on the crucifixion, because they say Jesus has now rose from the dead. That is why they often don’t have a crucifix on their walls or their churches. I do believe both churches have a lot to give one another, I have learnt a lot about deliverance for example mostly from Protestants. So I am not saying Catholics have nothing to learn from them. But I do wish Protestants are more willing to study Catholic saints. I remember a Protestant friend of mine, he used to be one of my bosses. He knew I loved Our Lord so he would often give me books to read and after about a year of this, I decided to give him an extract of St. Gertrude writings. The man had nothing against Catholics at all, he even acknowledge they were just as much as a Christian as the Protestants, but when I gave him this, his body language was one of fear. The word saint scared him, but once he read it he was no longer afraid and I then gave him fifteen beautiful prayers of St. Bridget. And he was very keen on those prayers. He came back to me and said we Protestant don’t say things like ‘Sacred Heart of Jesus.’ He was touched by it and felt it was a beautiful way of addressing Jesus’s Heart.

So I wish people were more willing to try things out with God, instead of just sticking with only what they know. I believe God gives everybody a special insight into His nature and we are meant to share it around. But because of prejudices we cut off our own nose so to speak, because we are too proud to admit that God also speak to other churches too. I am not talking about all churches, because some of them have beliefs that do not even accept Jesus is the Saviour. I am talking about mainstream Christianity.