Skip to content
HomeWhat is the Rosary? And How Some Protestant see Catholics

I can’t remember how it came about, but I do remember asking a friend who was a Protestant, if she was interested in saying the rosary with me. I was rather, shocked because she said yes. I told her there are two ways of saying the rosary. The most popular way when people come together and say the rosary, is while we say the prayer ‘Hail Mary’ our minds drift off to meditate on the mysteries of our redemption. In other words there is three main mysteries we meditate on while saying the rosary. The joyful, sorrowful and the glorious mysterious of Jesus’s life. The joyful mystery is the lead up to and the birth of Jesus and His early childhood. The sorrowful mystery covers Jesus suffering in the garden of Gethsemane and the lead up to the crucifixion. The glorious mystery is meditations on the Resurrection and what follows after it. Then I explained my favourite way is using a book on scripture verses on these subjects already set out for you to use while meditating on the mysteries of the rosary. I just find it a lot easier to meditate that way.

So she was happy to try to meditate on the joyful mystery by the help of the rosary with me. Some Catholics will only say one mystery a day, but Jesus is saying, because of the times we are living in, He wants us to say the three mysteries at least daily, which takes about an hour to do. But because she was new at it, we thought we say one mystery which takes about twenty minutes would do her, for a while.

Praying does Not Mean Worshiping, It is Communicating

Like most Protestants, me included when I was a Protestants, are very nervous about praying to Mary, because most people think praying is worshiping, but that is not what we are doing here. Praying to Mary doesn’t stop there. We pray to her so that she in turns prays to God on our behalf. When I was young I thought what was the point of that, why not pray to the top, meaning God. The journey God has taken me through life as a Catholic, He has taught me that I can do with a helping hand. In other words my faith united with Marys is a whole lot stronger then when I pray alone. If only Protestants can see that! I pray constantly that more and more Protestants realise that Satan is interfering with them, he doesn’t want them to know that God actually wants to use not only Mary but all the saints in heaven to be invited in our prayer life. They all will help us if we only believe in the communion of saints, like we are supposed to. In the Apostle Creed, which Protestants and Catholic say they believe in. In this very old creed we say we believe in the communion of saint.

Saints Will Help Us Too if We Ask Them

Protestants only believe in angles helping out. What the Protestants don’t believe is that Saints and the whole of the inhabitants of heaven are eager to serve God by serving us? All churches that started from a disciple of Jesus, who walked the earth with Him and was taught personally by Him, are very similar to each other. I was told by a women who was from the Greek Orthodox Church, which was started by the disciple of St. John, are told if they move to an area where there is no Greek Orthodox Church they are to attend the Catholic Church. Why? Because the old churches are very similar to one another, we all honour Mary for starters, we all celebrate the Mass, we all sign ourselves with the cross etc.

There is a lot of talk among Protestants that the Catholic Church did not start with St. Peter. I believe it is so because when Protestants would argue against the Catholic faith, we would all come back with and say the Protestant Church broke away from the true Church. So I really believe they didn’t like that answer so some historians or whatever, went looking for ways to disapprove it, which in fact they really haven’t. For example Catholics can trace our Pope’s back to Saint Peter, who we consider to be the first Pope. One thing they forgot to do, is discredit all the old churches that started with one of the twelve disciples of Jesus. They forgot all about them and I don’t know if they realised how similar our beliefs are to one another. Our ways being similar doesn’t surprise me, since they all learnt from the same Master, Jesus Christ. I believe the Catholic Faith is a continuation of the Jewish Faith, that is my personal opinion. The Protestant faith is so different in many ways from the older churches. To me that is evidence in itself why Protestants shouldn’t judge the Catholics as not being Christian. There are plenty of Protestants and Catholics that get on with one another and respect one another’s differences, which is the way it should be.  Mind you both Protestants and Catholics beliefs are about ninety eight percentage the same. People who argue against one another ignore that because, they are too busy fighting one another to hear one another out. The Holy Bible is the foundation on what both the Catholic and Protestant Churches beliefs based from. There are some verses in the Bible we interrupt differently.

I still believe Protestant have much to share with Catholics, but they too also have much to learn from us. If they had a clearer understanding how they misinterpret what is behind the actions of Catholic practises, they might even agree with the wisdom behind it. Samuel was told by God man judges by outward appearance, but God looks into the heart. I have studied this in people on every occasions to be so true. For example a Protestant sees a Catholic who say is going through a very hard time. The Protestant notice the person is never without her rosary beads. They conclude that she is turning to Mary and not God to solve her problems, which is far from the truth. When a devout Catholic is praying the rosary non stop, not only is she asking Mary to pray for her without ceasing and remember we believe Marys intercession is by far more powerful than our own, not only that, she is also meditating on the redemption of our souls. She is meditating either the Sorrowful, Joyful or the Glorious mysterious, which is ninety eight percentage wise, reflecting on what Jesus went through for our salvation. So without the Protestant realising it they imagine she is worshiping Mary. There is so much misunderstanding between the churches.

Satan is Working To Destroy Churches from Within

I believe Satan is doing everything possible to discredit the teachings of the Catholic Church, from working within the church itself. I remember when I was very young I went to a Catholic retreat, because I was considering to become a nun. Young women and men attended the retreat to find out more about the life of a religious and most of the guys were interested in becoming a priest. There were nuns and two priest leading the retreat. One of the priest was a very kind and holy man, but not the other one. I don’t know how I knew, except to say the Holy Spirit revealed to me, one of the priest was a Satan worshiper and he knew that I knew he was. He was so proud and was laughing at me and basically saying what can you do about it. Why I am bringing this up is how many evil people are wolves in sheep skins portraying as holy priest and pastors of God? I think there is a whole lot more going on than we realize is possible. And they are handpicked by Satan to destroy the churches from within. Anyhow his job was to select who will become a priest and who will not. So you can imagine what kind of men he would picked to enter in the priesthood.

What Does The Mother of God Actually Mean 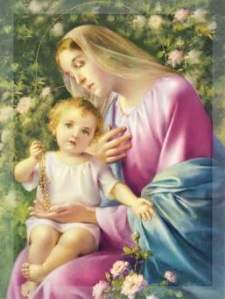 After my friend and I said the rosary, it was now no longer a mystery to her. She now knew clearly what the rosary was all about. And she now understood what the prayer ‘Hail Mary’ was about. The prayer has a history to it that many Protestants don’t know. And because they don’t know, Satan uses it against Catholics, so that people make wrong presumptions of what Catholics actually believe in. For example we say ‘Mary the mother of God.’ They don’t understand why Mary has this title, it is because there was a time in history that people were saying Jesus is not God. Christians all know Jesus is God the second person. But at this time in history people were refusing to believe it, so the Church wanted to clear this heresies up by saying Mary is the mother of Jesus who is God the second person.  We know Mary is not the mother of the Holy Trinity. But because people don’t know what we are actually saying they presume they know what we are actually saying. Like the human race we all have a tendency to see what we want to see, which is usually saying I am the superior one. Study people, most people are always running somebody down so that they can feel good about themselves.

A Need to Defend My Catholic Faith

After saying all that, I know there are very, very special Protestants out there that respect Catholics as a Christian. I have sisters that are Protestants and my father that I love very much was a Protestant and all the friends over many years God has given me, are mostly Protestants, so I am not against Protestants. Lately I have been very hurt by what some Protestants teachers and prophets what they are saying about Catholics. They are telling the world we are not even Christian. I have had Protestants friends that have told me. ‘I like you but I hate your church.’ How do you think that comes across? You love me but hate my family that have helped groomed me to be the person that I am, that you say you like. They don’t realize what they are saying. I know what I am saying is hurtful to some and I sure don’t want to hurt anybody, but I am hearing it all the time at the moment.

So I have a need to stick up for my faith that I love so much and thank God that God has lead me to this faith. My family background has taught me that both Protestants and Catholic have a great deal to offer one another if they are only willing to listen to one another. Catholics prophets that have warned against this current pope years before he came into being and saying he is going to do his best to break down the true Catholic teachings to complete heresies. He is going to divide the church of God. How sad.